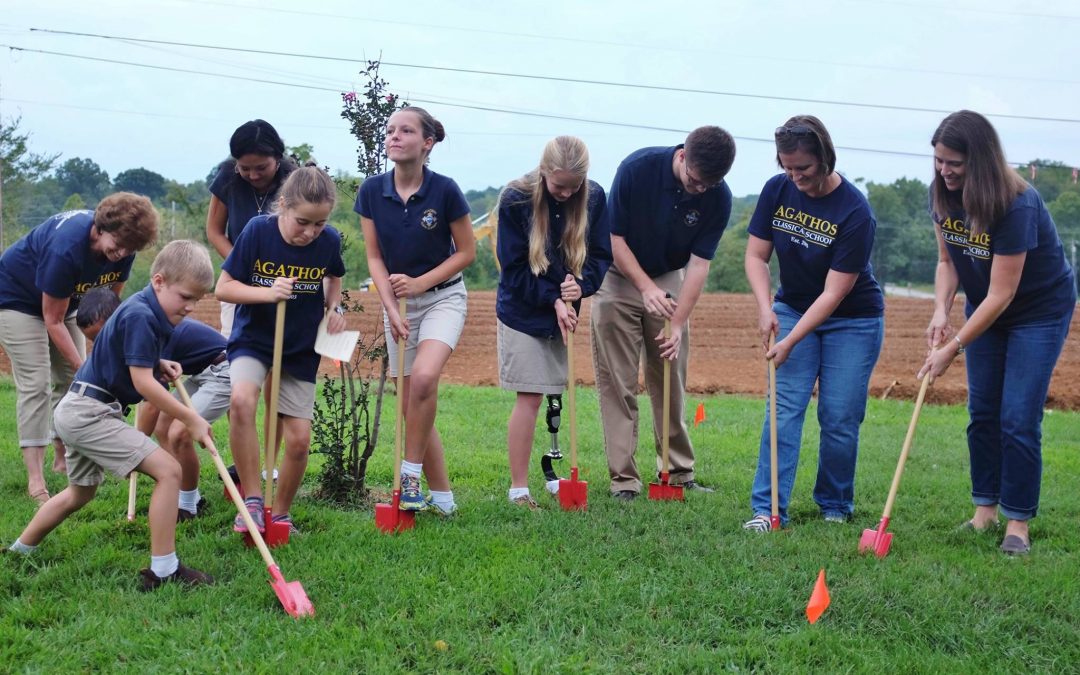 Columbia, TN – August 26, 2016 – Agathos Classical School joyously celebrated the groundbreaking of its first permanent classroom building at this year’s Back to School Picnic.  The school first met in finished barn space when it formed in 2003, and later gratefully used rooms at local churches.  In 2007, the school moved to its current 17-acre campus at which portable classrooms affectionately dubbed “learning cottages” encircle a flagpole.

Planned for 5,894 square feet of space, the new one-story building will include six classrooms and a central gathering hall.  An additional wing with two more classrooms can be added in the future.

Student and teacher representatives wielded shiny red shovels to break ground where a future sidewalk will connect the new building with the existing Virginia Jean farmhouse.  After the ceremony, all present were invited to sign a uniquely-shaped boulder, recently dug from the construction site.  The stone will be sealed and displayed as part of the new building’s landscaping. The celebration was backdropped by a line of bulldozers and excavators neatly flanking a flat earthen pad.

“Nuber Architecture is pleased to partner with Agathos Classical School on a project which embraces the spirit of classical design and innovation in the classroom environment,” explained architect George Nuber.  “Being the first new permanent structure on campus, the architecture of the facility was inspired by the original Virginia Jean farmhouse, but adds a distinct architectural language that will inspire future projects. Working in an environment which is intentionally less institutional, we trust this will encourage students and faculty to appreciate an atmosphere that will direct their focus on academic excellence.”

“It is a wonderful time to be at Agathos!” exclaimed Ted Trainor, Head of School.  “What a joy to see God faithfully providing for our needs through this construction project as he has done these last thirteen years. I truly look forward to seeing this new building be a vehicle for inspiring generations of young people to honor God and serve their fellow man via an Agathos classical Christian education.”

At the Groundbreaking Celebration, Dr. Mark Seago, Chairman of Agathos’ Board of Trustees, reflected on how the school’s needs have been met throughout its history, attributing all provision to God’s blessing.  He thanked those who perform the “little things,” perhaps less visibly, that enable the school to run smoothly, noting that there truly are no little things.  He expressed appreciation to George Nuber for designing the project, to Scott Walker and Kathy Lafferty of First Tennessee Bank for financing, to Bart Whatley for serving as an advisor, and to general contractor Paul Varney of Paul Varney Construction.  Varney expressed that his firm is “glad to be a part of this project for a great private school in the area.”  Completion is anticipated in early 2017.

The new classroom building (right)  echoes the style of the existing Virginia-Jean farmhouse which will continue to serve as office space and the studio for art and music classes.   Image: Nuber Architecture

Student and teacher representatives broke ground on what will become the sidewalk between the existing Virginia Jean House and the new classroom building, symbolically linking the school’s present with the future.  Photo:  Warren Greene 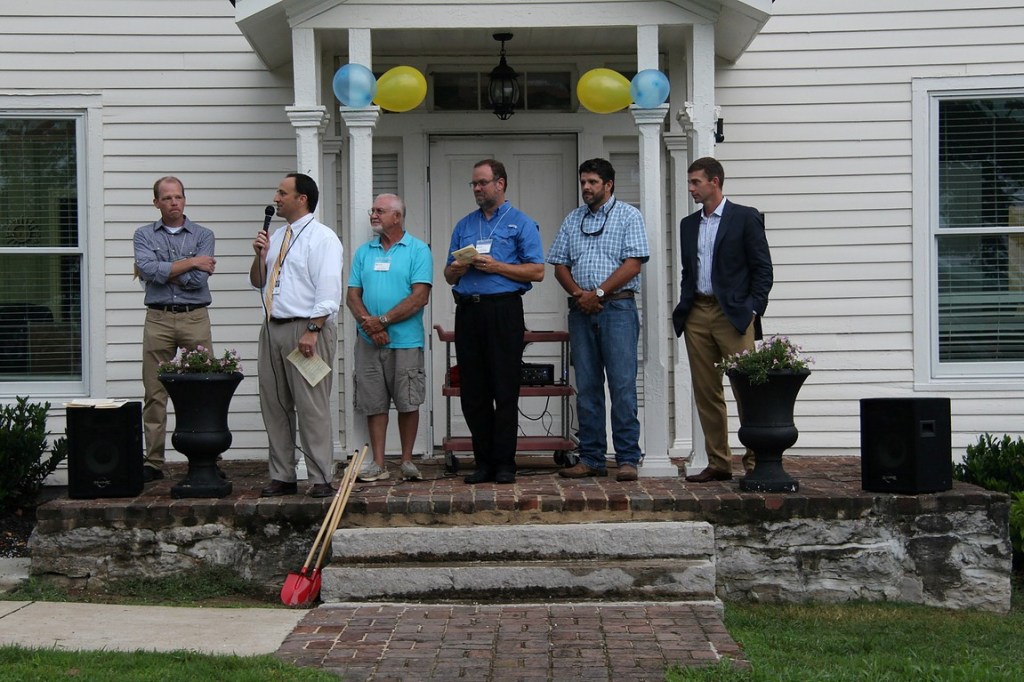