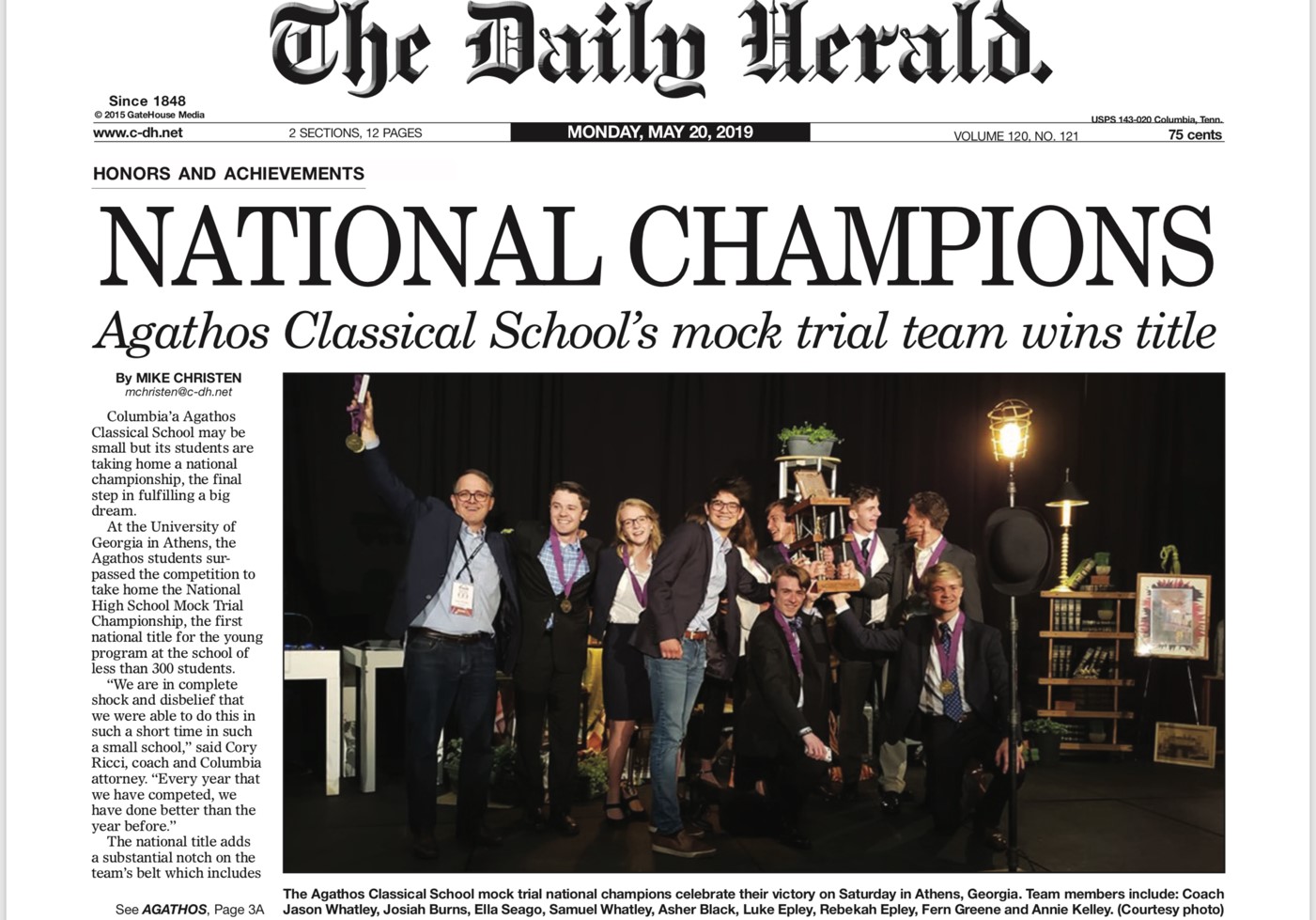 The Agathos Classical School Mock Trial Program, in its fourth year of existence, finished the 2018–2019 season by winning the National High School Mock Trial Championship on May 17-18, 2019 in Athens, Georgia.  It was the pinnacle of regional, state, and national competitive elimination in a grueling, 5-trial, power-paired contest featuring the champions of 46 states and territories. In 2018 and 2019, the program achieved back-to-back Tennessee State Championships, finishing undefeated and third in the nation at last year’s national tournament in Reno, Nevada.  It is estimated that about 30,000 high school students across the United States, Guam, Mariana Islands, and South Korea compete each year for the top prize, making the achievement of Agathos, a school that had 215 students in May 2019 (Pre-Kindergarten through 12th Grade), all the more remarkable.  Each year at the state level, the single highest ranked Plaintiff/Prosecution attorney receives a distinguished honor known as the Robert Horton Campbell Award.  An Agathos student has secured that award for the last three consecutive years and placed second for it the year prior.  In the last two years on the national level, Agathos faced state and former national champions from Georgia (twice), Nevada, Pennsylvania, North Carolina, North Dakota, Illinois, Massachusetts, and, in the championship round in 2019, Nebraska — without losing a single trial.  In its most recent national championship trial on May 18, 2019 against a stellar Nebraska program, Agathos won every ballot, one from each of the 15 jurors, lawyers and jurists hand-selected for their individual achievements in the legal field.  According to the Institute of Competitive Sciences, the Agathos Mock Trial Program is statistically poised to become a dynasty in the world of high school mock trial in the coming years.

Mock trial allows students to try cases, using high school students as attorneys and witnesses, in real courtrooms, with real judges and real attorneys as jurors, using real law and rules of evidence and procedure.  The model is so similar to that seen in actual trials that the skills of top high school mock trial attorneys are consistently compared to real-world, experienced trial attorneys.  The sport is intensely competitive, earning the description by Attorney Coach Cory Ricci as “the highest order of intellectual combat.”

For Agathos, a school with a classical approach to education, mock trial could not be a better fit.  Classical education utilizes the “trivium,” an educational framework emphasizing at ascending points the memorization of facts (knowledge) in grammar school, the learning of logic in middle school, and the use of rhetoric (persuasively arguing facts through logic) in high school.  More fundamentally, Agathos students are exposed to profound ideas and literature, consuming vast volumes of the best works of Western Civilization, and being firmly immersed in deep thoughts and principles.  All of this provides a forceful and dynamic foundation for effectively preparing, presenting, and arguing criminal and civil trials.

A review of the accomplishments of Agathos over its four years shows how meteoric the rise of the program has been:

Other persons associated with the team include:

The significance of the success of Agathos Mock Trial cannot be fully appreciated without understanding something of the school itself.  When the program began in the fall of 2015, the high school had less than 20 students — the complete field of prospective team members for the minimum six-person mock trial team.  Making matters more difficult for the start-up program, mock trial teams typically focus on fielding upperclassmen, a luxury that missed Agathos, the school having only one senior in the program’s first year.  The inaugural team was  barely able to muster, consisting of two sophomores and five freshmen.  None of these students had ever heard of mock trial and knew little or nothing of courtroom procedure, rules of evidence, or the law.

Before the program’s first competition, the regional tournament in neighboring Williamson County, a contest with high schools literally 100 times its size, Coach Jason Whatley was asked by Grant Kelley, one of the school’s rhetoric teachers, how he felt about the team’s prospects.  Whatley responded, “If they win one ballot from one judge in one round (trial), I’ll be happy.”  The team responded by winning every single round and securing an invitation to the state tournament, besting schools with graduating classes that by themselves would dwarf the enrollment of the entire Agathos campus.  The team never looked back and ultimately developed a singular focus:  Win a state title, which three of the freshmen from the original squad did for the second time in 2019 — along with a national championship to boot — the swan song of their senior year.

The story of the 2019 squad is a tapestry of personal achievement and self-sacrifice.  Of special note, in 2018 the team graduated its captain of three years, Luke Worsham, the winner of the top Plaintiff/Prosecution attorney at the state level in 2017 and 2018, in addition to numerous other personal awards.  There was little dispute that Luke’s enthusiasm for mock trial helped to anchor it at the school.  But with his departure, the open discussion among team members was whether the team could still compete for another state title — much less a national championship.  It just seemed too much to overcome.  But when all the ballots were finally counted at the 2019 national tournament, they showed that there were no superstars representing Agathos, but rather a close-knit and finely-tuned team of students driven by faith, fortitude, loyalty, humility, and love for each other and their school.  Each team member played his or her own unique and irreplaceable part, combining to be the best team in the nation.

It goes without saying that none of this came easy.  For example, on the day before the 2019 national tournament, after two tough scrimmages against the champions from Michigan and Nebraska, the consensus was that the team did not fare well and was simply not ready.  Refusing to panic, the team, which had already been stretched to its limit, re-worked multiple areas of its case, with students taking the lead in re-forming, smoothing, fixing, and polishing anything that needed help.  Even during the national tournament over the course of the next two days, between rounds and in high drama, through much anguish and tears, students worked to refine areas of proof, keeping their eye on the next trial and pressing forward ultimately to a national title.

Agathos’ story has been noticed.  The school’s home town of Columbia, Tennessee declared July 12, 2018 “Agathos Mock Trial Day,” and the team is now slated to receive proclamations from Columbia, Maury County, and the Tennessee Legislature in honor of its national victory.  Agathos has also attracted significant media attention, including even a story on ABC’s Good Morning America, drawing attention to the David versus Goliath aspect of their 2019 championship.  Here are links to that report, as well as some of the other media who have covered the team’s journey:

In 2019, Agathos fielded two teams at the regional and state levels, Teams Gondor and Rohan.  The names, taken from J.R.R. Tolkien’s Lord of the Rings trilogy, refer to the two good kingdoms of Middle Earth, united in their strength to defend each other as they fight for survival.  Throughout the season, the analogy guided the two teams and aptly described the love and friendship among the team members.  Although at the end only one team could win the state competition and fight for nationals, the teams remained unified until the national competition finally came to a close and victory had been won.  The 2019 team shirts, an annual tradition, contained the crest of Gondor and Rohan on each sleeve, with the following battle cry by Tolkien’s Aragorn on the back:

Sons and Daughters of Gondor, of Rohan, my brothers and sisters,

I see in your eyes the same fear that would take the heart of me.

A day may come when the courage of students fails,

when we forsake our friends

and break all bonds of fellowship,

but it is not this day.

An hour of wolves and shattered shields,

when the age of Agathos comes crashing down,

but it is not this day!

This day we fight!

By all that you hold dear on this good Earth,

I bid you stand, Men and Women of Agathos!

— Aragorn, at the Black Gate before the final battle.

For Agathos students, all of whom are very familiar with the LOTR story, their four-year path to national victory was very much like the journey of Frodo and Sam and the Fellowship of the Ring, as these friends struggled to achieve what most considered the impossible.

The Agathos Mock Trial Team has the same motto as the school itself, Soli Deo Gloria (“Glory to God Alone”).  The team dedicates itself this this proposition, although students have informally declared a secondary program motto to be, “Mock Trial Above All,” a loving and tongue-in-check reminder of the significant dedication and sacrifices team members have made and continue to make to achieve national success, recognition, and honor for themselves and their school.

In 2015, one of the very first acts of the Agathos Mock Trial team was to corporately pray that its efforts and achievements would be to God’s glory.  That simple act of seeking divine guidance followed the team through each tournament and trial, year after year, with regular moments of group prayer to seek strength and bravery for the battle ahead.  So engrained was the tradition of praying before trials that at the 2019 state tournament Team Gondor found itself in a panic when their two coaches were both attending to Team Rohan in the minutes before the start of a trial.  At the last moment, a coach was found, a prayer offered, and the team went on to win the tournament.  True to form, senior and founding member Josiah Burns, immediately after exiting the national stage in 2019 and with tears of joy still falling, rallied his teammates to take a knee and pray as a team — one last time — an exclamation point on what has defined these special students for four years.

The impact of this program on the school has not been limited to its mock trial students.  In a school with just over 200 students from Pre-Kindergarten through 12th grade, having a nationally competitive team has been felt by virtually every student, both the elation of high achievement and the hard work of having to balance the demands of school, mock trial, and other activities.  As an example, due to qualifying for the national competition, Headmaster Ted Trainor has had to move the school’s graduation the past two years in order to accommodate seniors who were competing out-of-state.  But the effort has been worth it.  Every year, when the team leaves for its state competition, the school turns out en masse, literally all grades, cheering on the lawyers, witnesses, time keepers, coaches, and advisors as the team boards and heads for the next competition.  Upon their return from winning the national title in Athens, an estimated 100 students, parents, administrators, and friends turned out to welcome their Agathos Warriors home.

This is the end of the first chapter in Agathos Mock Trial.  The students and coaches are looking forward to the challenge of continuing its success after seeing its remaining founding members graduate in 2019.  All team members are deeply grateful to their school, parents, classmates, the Maury and Williamson County Bar Associations, the Tennessee Bar Association, Young Lawyers Division, and all other friends who have dedicated themselves to the success of the program.

More importantly, the team members of the Agathos Mock Trial Team believe strongly that any success they have had is not born only of their efforts, of the blood, sweat, and tears each of them has given.  Instead, these students maintain that it has been by God’s grace alone that success has come.

The team’s foundational verse is Micah 6:8:

“O man, what is good; and what doth the LORD require of thee,

but to do justly, and to love mercy, and to walk humbly with thy 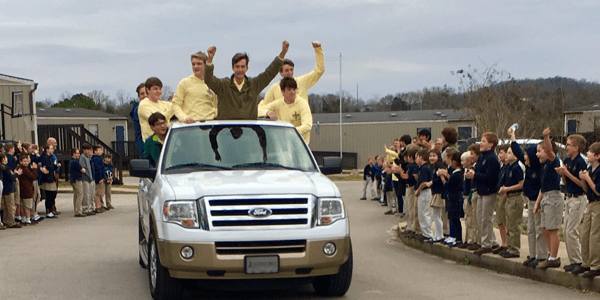